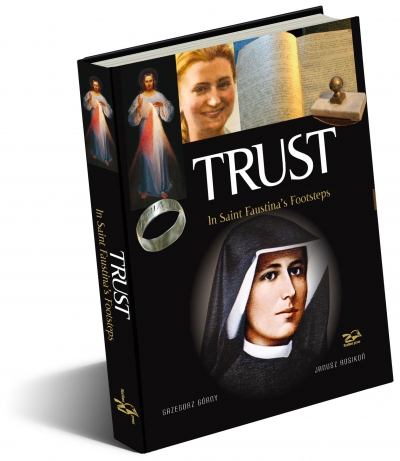 This is the amazing story of St. Faustina—one of the greatest Christian mystics of the twentieth century—and her devotion to Divine Mercy, which has become the fastest spreading religious devotion in the world.

On every page of this book are gorgeous photographs and illustrations that help to tell the story about God’s immense love for us and the reciprocation of this love by the humble Polish nun canonized by Pope John Paul II.

In fulfilling the mission entrusted to her by Christ, to promote the message of his Divine Mercy, Sr. Faustina met with many obstacles; but she came through all her trials victoriously, that is, with faith, hope, and charity. Her message about God’s infinite mercy has accomplished seemingly impossible things. Although it originates from the spiritual visions of just one person, devotion to Divine Mercy has spread throughout the world like fire, helping people of every nation to reconcile with God and with each other.

To follow in the footsteps of St. Faustina, the author and photographer visited all the key locations connected with her life including Warsaw, Kraków, Plock, and Vilnius. They recorded their observations and findings with inspiring text and beautiful photographs to bring the Divine Mercy story to a worldwide audience.

„This new book traces the course of Helen Kowalska (St. Faustina) and her spiritual pilgrimage through Poland where she spent her life. Faustina died in 1938 and like Christ lived for 33 years. The authors (a TV producer and photographer) assemble an abundance of photographs, maps, quotations, diagrams and explanatory text to illustrate her life in major locations in Poland such as Krakow, Glogowiec, Lodz and Vilnius. To Faustina was consigned the great mission of proclaiming the message of Divine Mercy to the whole world. The book follows her life life through novitiate, juniorate, final vows, and her spiritual direction by Father Sopocko and others. Of particular interest is the description of the obstacles faced in gaining acceptance of her visions; and the support of Cardinal Wojtjla (later John Paul II) and his encyclical Dives in Misericordia, which paved the way for the beatification and canonization of Sister Faustina in August 2002. An excellent book that enhances one’s understanding of St. Faustina and Divine Mercy.”

“They say a trip to the Holy Land makes Sacred Scripture come alive. Similarly, this book is like a pilgrimage to Poland ‘in the footsteps of St. Faustina’ that makes the gripping message of Divine Mercy personal, vivid, and real.”

“One of the best books available on the life of St. Faustina!  As the ‘Secretary of Divine Mercy’ and the first canonized saint of the third Christian millennium, St. Faustina models one of the most important elements of the Divine Mercy message and devotion: TRUST!  Beautifully illustrated and historically informative, this book is a Divine Mercy gem!”

—Fr. Donald Calloway, M.I.C. Author, No Turning Back: A Witness to Mercy

BUY – To buy the English edition on Amazon click here